Survey Shows that Northern Offices are the Friendliest 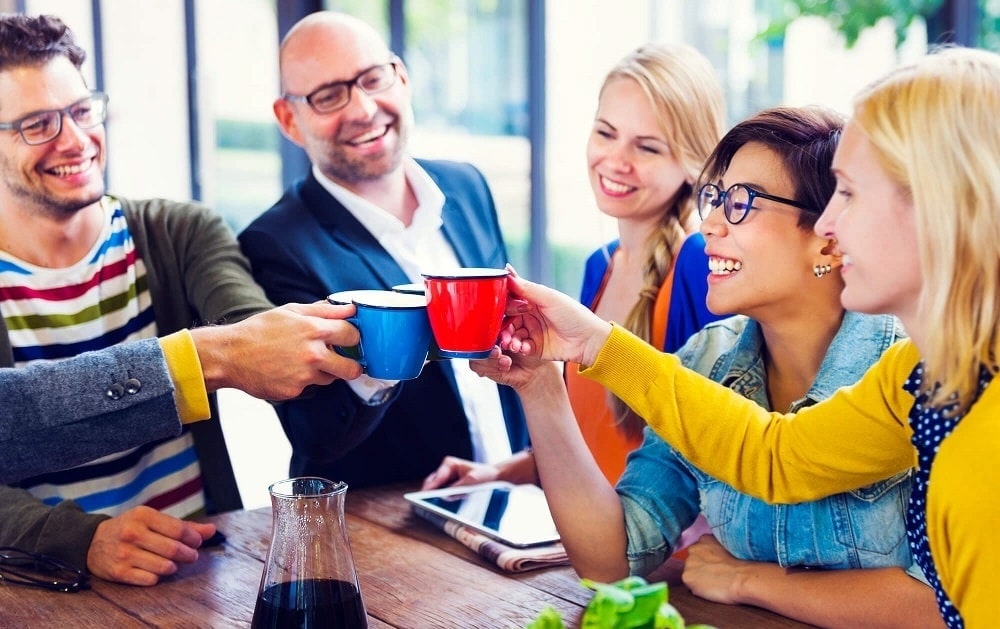 Great Britain is a very tribal place. Whether it's the price of a pint, the quality of fish and chips or which place has produced the best musicians, there's always something to bicker about when talking about where people come from. One argument that constantly pops up is how friendly people are. People are always saying that some places are more friendly than others, or "it's grim up north", or that everyone from London is in such a hurry that they forgot their manners. FreeOfficeFinder has decided to put the issue to bed and find out the answers once and for all.

As the UK has hundreds and towns and cities, we decided to narrow our research down to ten, split across the UK to give us an idea of the differences between north and south. The following towns were surveyed:

We asked 300 office workers (150 men, 150 women) from each of these towns and cities one question: are you friends with any of your workmates out of work. The results were pretty shocking.

53% of all office workers said they had a friend outside the office. This sounds quite normal, but it doesn't tell the whole story. There were huge gaps between certain places, which proves that some towns and cities are definitely more friendly than others (when it comes to office work).

When it comes to friendly office workers, people from Liverpool scored the highest out of all places on the survey, with 72% of all office workers having at least one friend in the workplace. This was closely followed by Glasgow with 68%, then Newcastle with 66%. The three most unfriendly places to work in an office were Bournemouth (35%), London (36%) and Bristol (39%)

When you look at the above table, the difference between north and south is quite astonishing. None of the southern places in the survey scored over 50%, while all of the northern places scored over 50%. Birmingham, which is in the middle of the country, scored 53%, which is the closest to 50% on the entire survey. The correlation is quite clear, but why is it so different? Perhaps those living in the south have to spend so much money on living expenses that they have nothing left to socialise with? Or the weather is so bad up north that office workers have no choice but to go straight to the pub after work? Either way, it seems that offices in the north are much friendlier. 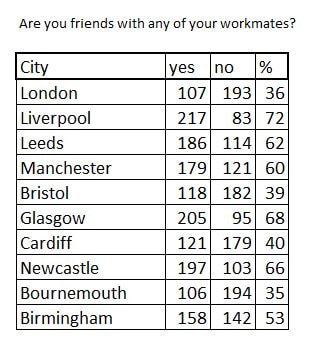 The results show that the women in the survey are a slightly friendlier bunch than men, with 56% having a friend at work as opposed to 50% of the men. But once again, this varied according to place.

If you're a woman working in an office in Liverpool, there's an 80% chance that you'll have a friend in the workplace. Men in Liverpool are slightly less friendly, but in Glasgow, a massive 76% of all men answered positively. London looks like it's the most unfriendly place for a man to work, with only 27% of all London answering yes to the quest. For women, Bournemouth and Bristol scored the lowest, with a friendliness rating of only 39%.

So there we have it. If having lots of friends in an office environment is something you're looking for, it's time to move to Liverpool!